A tall man’s skeleton buried in a construction ditch partly under the fortress wall of the ancient city of Odessos has been discovered in the downtown of Bulgaria’s Varna. Photo: TV grab from Nova TV

Bulgarian archaeologists have discovered a tall man’s skeleton during rescue excavations of the ancient Greek and Roman city of Odessos in the downtown of the Black Sea city of Varna.

The large human skeleton has been found in a grave partly located under the fortress wall of Odessos, which is being excavated by archaeologists from the Varna Museum of Archaeology (also called Varna Regional Museum of History).

The skeleton is dated back to the late 4th century or the early 5th century AD, according to Dr. Valeri Yotov who is in charge of the rescue excavations of Varna’s ancient city of Odessos.

It has been found near the St. Nikolay Church, just 20 meters away from the site where a 5th century earthen jar was discovered in January 2015 by construction workers during water supply and sewer rehabilitation, an event that triggered the rescue excavations of the so called Varna Largo, the passenger zone on the central Knyaz Boris I Boulevard.

Last week, the Varna archaeologists found a previously unknown part of the Odessos fortress wall as well as part of another earthen jar and a hand mill from the late Antiquity.

“As we started to uncover the ancient fortress wall, we started asking ourselves a lot of questions, and, of course, we had to keep digging to reach the wall’s foundations. That’s how we stumbled upon the skeleton," explains Yotov, as cited by Varna Utre.

The working hypothesis of the Varna archaeologists is that the skeleton belongs to a man who died during the construction of the fortress wall of ancient Odessos, and that his remains were laid in a pit originally dug up as a construction ditch for the wall foundations which was also “utilized" as a grave.

The man’s death might have been caused by a work-related accident or a different type of occurrence at the time the wall was being erected, according to Yotov. 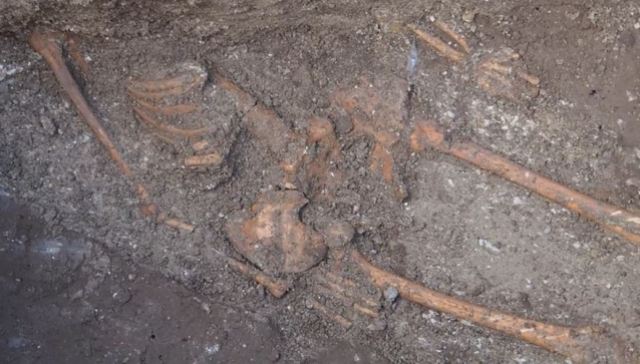 Most of the upper body part of the skeleton found in Varna was lying under the newly discovered fortress wall of ancient Odessos. Photo: TV grab from Nova TV

“It is possible that someone used the pit, which had been dug up [for construction purposes], to bury the body," he says, stressing that the body was originally buried under 3 meters of earth.

Since graves of such depth are very rare, this is taken to mean the pit must have been dug up as a construction ditch at the time when Odessos’s fortress wall was being erected.

Further evidence of a burial, according to the Varna archaeologists, is that the tall man’s skeleton lies in an east-west position, and his hands are placed on his waist.

Yotov himself says he sees nothing “exceptional" about the discovery of the skeleton. Yet, as it took the archaeologists a while to unearth the entire skeleton, passers-by in the downtown of the Bulgarian city of Varna have started speculating about the fate of the tall man whose skeleton they could see.

Some have even been quick to describe the ancient man as a representative of the “long extinct race of Atlantis giants".

“There are no indications that this man was a vampire, an Atlantis giant, or anything like that," archaeologist Valeri Yotov has commented jokingly, apparently referring to a host of discoveries in Bulgaria in recent years of impaled medieval skeletons, apparently to protect them from turning into vampires after their deaths.

A more realistic, though also questionable hypothesis voiced by some of the onlookers in the street is that the tall man might have been the victim of a crime back in the 4th century AD, and that the construction ditch was used to get rid of his body. However, the local archaeologists appear hardly intent on exploring such guesses.

The rescue digs of ancient Odessos are set to continue for a few more weeks, with the Varna archaeologists believing that the main gate of the ancient fortress might be located near the site of their recent discoveries.

Update: Ten days after the initial discovery of the ancient man’s skeleton in Bulgaria’s Varna, Valeri Yotov, lead archaeologist of the rescue excavations of Odessos (Odessus), has made it clear that the skeleton has not been fully excavated or measured yet.

The dawn of Varna‘s history dates back to the dawn of human civilization, the Eneolithic Varna Necropolis being especially well known with the discovery of the world’s oldest find of gold artifacts dating back to the 5th millenium BC.

Ancient Odessos is considered the precursor of the Bulgarian Black Sea city of Varna. It was founded by Miletian Greek colonists at the end of 7th century BC, the earliest Greek archaeological material dating back to 600-575 BC. However, the Greek colony was established within an earlier Ancient Thracian settlement, and the name Odessos had existed before the arrival of the Miletian Greeks and might have been of Carian origin. Odessos as the Roman city of Odessus became part of the Roman Empire in 15 AD when it was incorporated in the Roman province Moesia. Roman Odessos is especially known today for its well preserved public baths, or thermae, the largest Roman single structure remains in Bulgaria, and the fourth largest Roman public baths known in Europe.

The First Bulgarian Empire (680-1018 AD) conquered Odessos (Varna) from Rome‘s successor, the Eastern Roman Empire, or Byzantium, in the late 7th century. It is even believed that the peace treaty in which the Byzantine Empire recognized the ceding of its northern territories along the Danube to Bulgaria was signed in Odessos. The v(val) that the first ruler of Danube Bulgaria, Khan (or kanas) Asparuh built at the time as a defense against future Byzantine incursions is still standing. Numerous Ancient Bulgar settlements around Varna have been excavated, and the First Bulgarian Empire had its first two capitals Pliska (681-893 AD) and Veliki (Great) Preslav (893-970 AD) just 70-80 km to the west of Varna. It is suggested that the name of Varna itself is of Bulgar origin. In the Middle Ages, as a coastal city, Varna changed hands between Bulgaria and Byzantium several times. It was reconquered for the Second Bulgarian Empire (1185-1396 AD) by Tsar Kaloyan (r. 1197-1207 AD) in 1201 AD.