Part of a sarcophagus featuring the image of the Gorgon Medusa (upright in the middle), the Greek mythology monster with female face and snakes instead of hair, is one of the impressive archaeological finds saved from the hands of treasure hunters by the Shumen Police. They have been found in a treasure hunter’s garage in Bulgaria’s Shumen. Photo: Interior Ministry Press Center

Police in the District of Shumen in Northeast Bulgaria have raided the homes of several local treasure hunters rescuing priceless archaeology artifacts, including 9000 coins, dozens of Ancient Roman statues, and a stone slab with possibly Ancient Sumerian motifs, which had been destined to be trafficked to other EU states.

The artifacts saved by the Shumen police include Ancient Roman statues and slabs, coins and figurines, as well as matrixes for the forging of ancient coins, the press service of the Bulgarian Interior Ministry has reported.

Many of the statues and other artifacts are marble, and can potentially be dated back to the Roman Empire in the 1st-2nd century AD even though Bulgarian archaeologists and numismatists are yet to study them thoroughly to try to date them precisely and figure out their places of origin.

One of the really interesting artifacts rescued by the Shumen police is a fragment of a sarcophagus depicting the Gorgon Medusa, one of the three gorgon sisters in Ancient Greek mythology – a monster with a hideous human female face and venomous snakes instead of hair (pictured above). 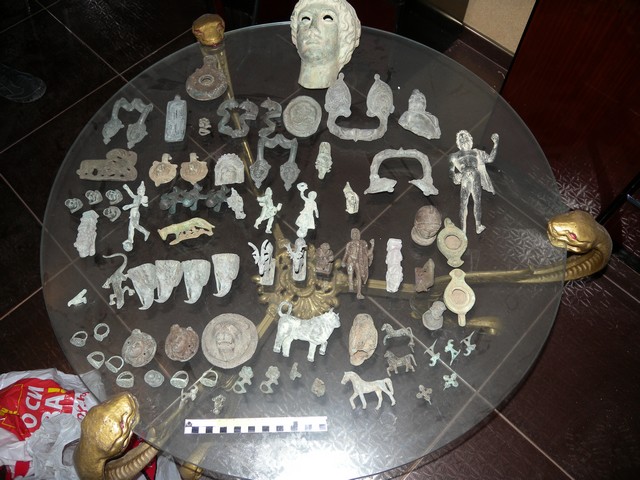 The rescue of the supposedly mostly Ancient Roman artifacts occurred in a police operation in the city of Shumen, and the nearby towns of Veliki Preslav (Great Preslav, which was capital of the First Bulgarian Empire in 893-970 AD), Novi Pazar, and Ivanovo in early March. However, it was only announced on March 24, 2015, at a special press conference in Shumen by District Police chief Iliyan Nikolov, Prosecutor Margarita Georgieva, and archaeologist Yuri Yorgov and numismatist Zhenya Zhekova from the Shumen Regional Museum of History.

“These artifacts are extremely rare, and we cannot say as of yet where they originated,” Yuri Yorgov, an expert from the Department of Medieval Archaeology in the Shumen Regional Museum of History, is quoted as saying. 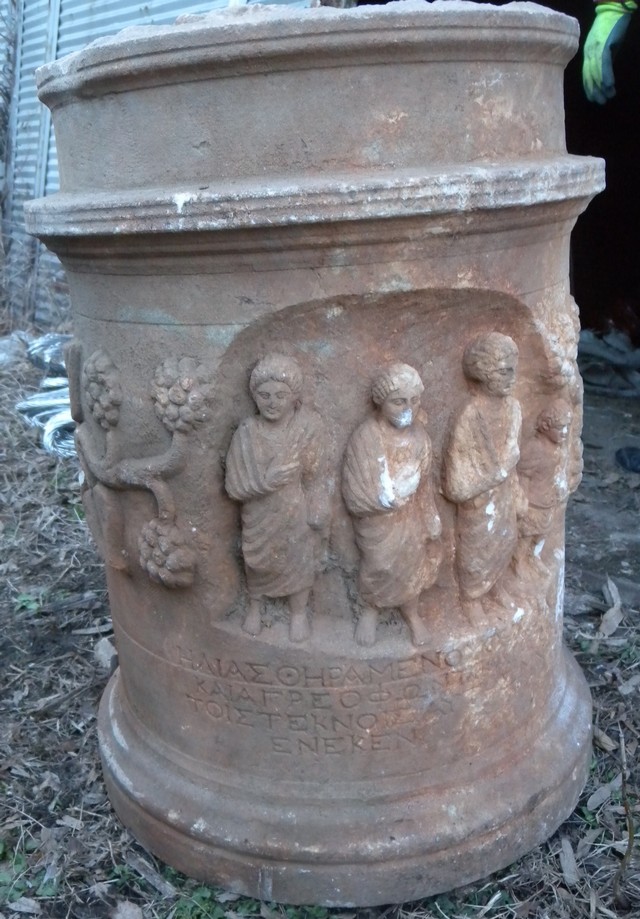 An ancient dedication altar with the images of a family and an inscription in Ancient Greek is among the impressive finds rescued from the hands of the treasure hunters in Bulgaria’s Shumen District. Photo: Interior Ministry Press Center

He points out that one of the most impressive artifacts seized from the hands of the treasure hunters is a dedication altar with the depiction of a family and an inscription in Ancient Greek, which is yet to be read and deciphered, and that some of the other items have Hellenic and even Sumerian motifs.

“We can’t say for certain yet if all of the artifacts are authentic but we have evidence that most of them are,” Yorgov adds explaining that experts from other institutions have been approached in order to provide additional expertise. 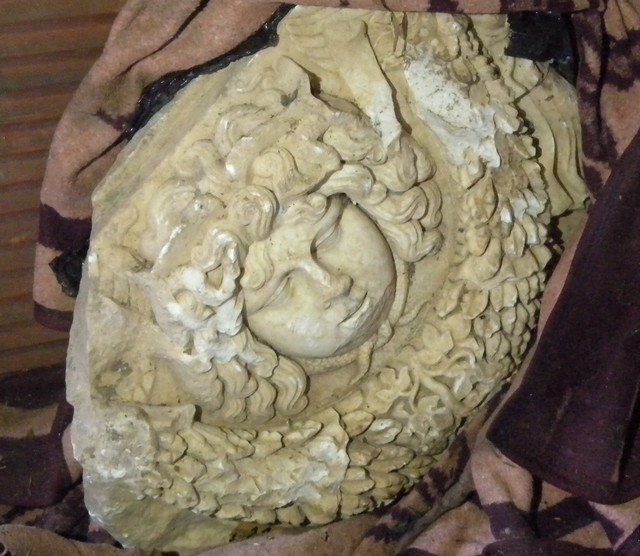 Fragments from Greco-Roman statues from the 1st-2nd century AD are among the impressive archaeological finds saved from the hands of treasure hunters by the Shumen Police. Photo: Interior Ministry Press Center 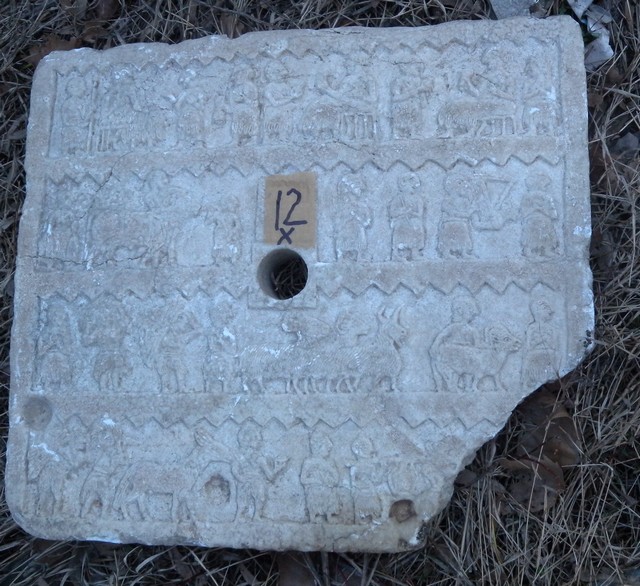 This ancient stone slab confiscated from the treasure hunters in Shumen depicts images resembling Ancient Sumerian motifs and has been likened to the relief of the king of the Sumerian city of Lagash Ur-Nanshe (also known as Ur-Nina), the first king of the First Dynasty of Lagash (around 2500 BC), which is kept in the Louvre Museum in Paris. Photo: Interior Ministry Press Center

Another unique item is a stone slab with scenes showing people and animals that seems Sumerian or at least influenced by the art of Ancient Sumer in Southern Mesopotamia. The slab has a round hole in the middle. It is said to resemble the Sumerian relief of the king of the Sumerian city of Lagash Ur-Nanshe (also known as Ur-Nina), the first king of the First Dynasty of Lagash (around 2500 BC), which is kept in the Louvre Museum in Paris.

UPDATE as of March 27, 2015: Bulgarian archaeologist Nikolay Ovcharov has identified the stone slab as originating between 3000 and 25000 AD inAncient Sumer in Mesopotamia.

The marble slabs have traces of soil and limestone deposits which is taken to mean that most of the items are authentic, states the announcement of the Bulgarian Interior Ministry.

“Among the coins there are some that authentic, some are even in the condition in which they were found in the ground, but there are also some that have been produced recently,” explains Zhenya Zhekova, who is the head of the Department of Numismatics in the Shumen Museum, as cited by Darik Shumen. She has also mentioned that most are copper coins. 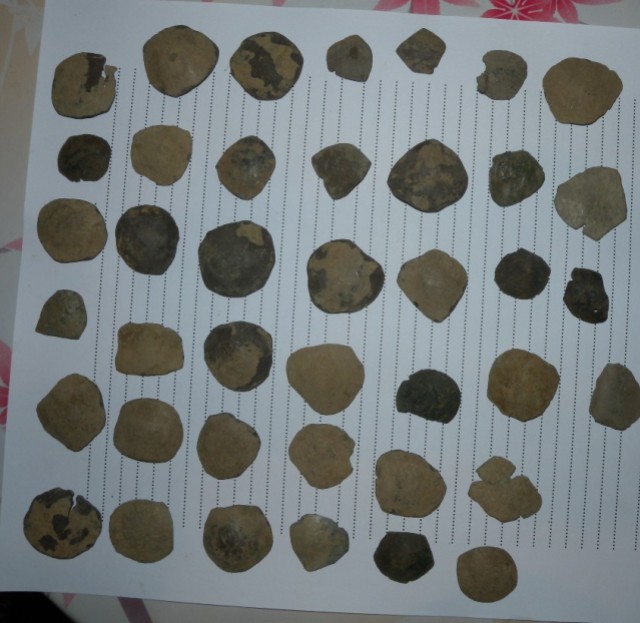 More than 9,000 ancient coins including forged ones were seized from the treasure hunters in the Shumen District. Photo: Interior Ministry Press Center 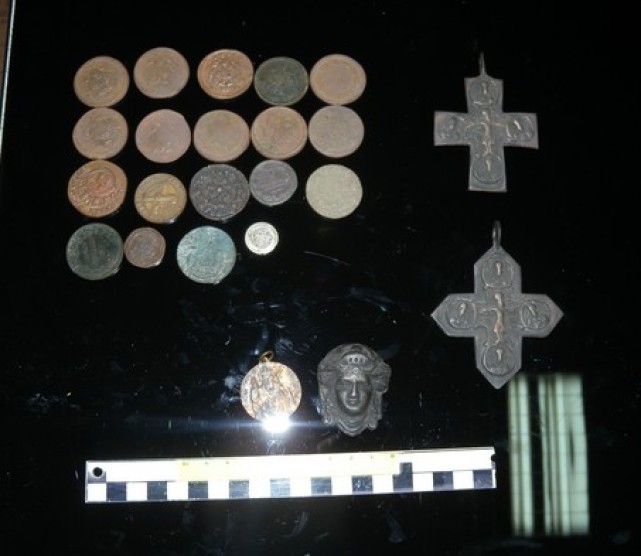 More than 9,000 ancient coins including forged ones were seized from the treasure hunters in the Shumen District. Photo: Interior Ministry Press Center

The police arrested three men for treasure hunting on March 11, 2105, after raiding their homes and discovering the Ancient Roman artifacts. They have established that some of the archaeological treasures had been destined for trafficking to other countries in the European Union.

After they were tipped off about illegal trafficking and ownership of cultural treasures, the Shumen police first raided the home of a 56-year-old man in the city of Shumen where they found a total of 19 Ancient Roman marble and stone slabs with inscriptions and figurines and parts of Roman statues hidden in his garage. 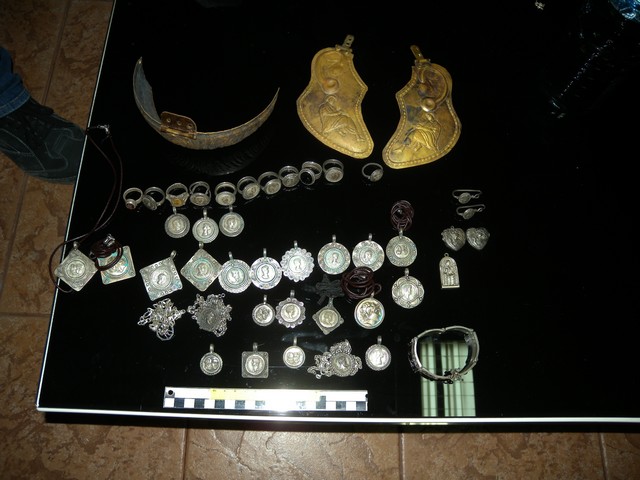 Prosecutor Georgieva says that the investigation is still under way but the investigators have not discovered evidence of an organized crime group, which probably can be taken to mean that the arrested men were “independent” treasure hunters.

Treasure hunting and illegal trafficking of antiques happen on a mass scale in Bulgaria with thousands of treasure hunters and traffickers doing irreparable damage to priceless archaeological monuments all over the country, including in the northeast District of Shumen where the Shumen Regional Museum of HIstory presented in February 2015 an entire exhibit consisting of archaeological artifacts saved from the hands of treasure hunters. The exhibition is called “Rescued Relics”. 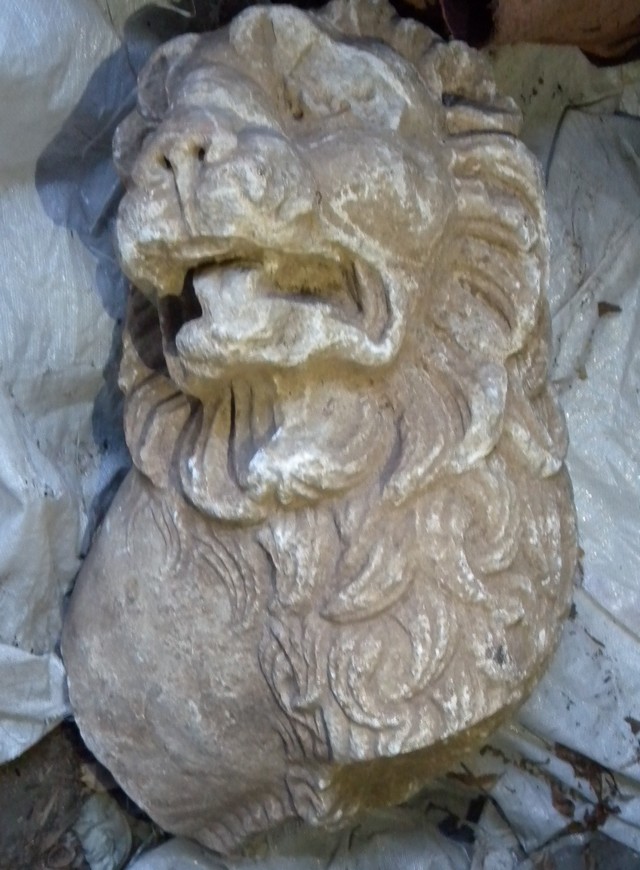 A lion’s head, apparently a fragment from an ancient sculpture, is among the items seized by the police in Shumen. Photo: Interior Ministry Press Center 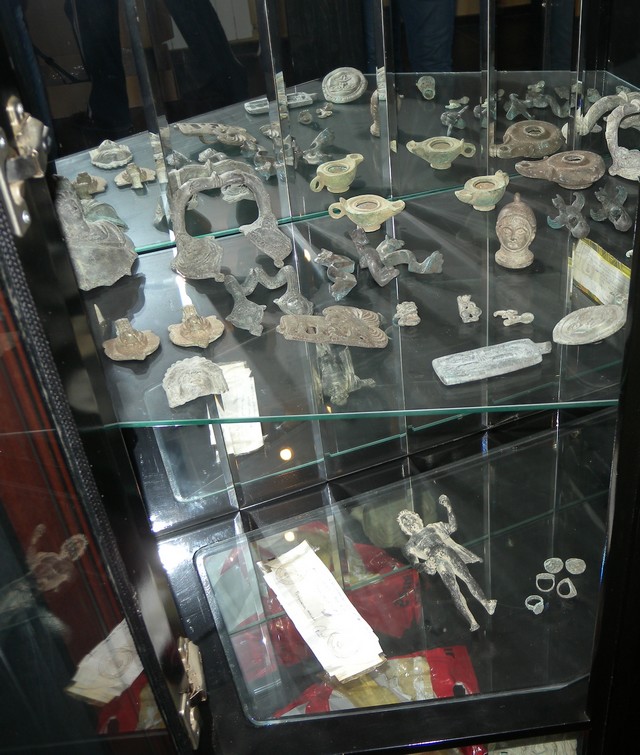 Treasure hunting and illegal trafficking of antiques have been rampant in Bulgaria after the collapse of the communism regime in 1989 (and allegedly before that). Estimates vary but some consider this the second most profitable activity for the Bulgarian mafia after drug trafficking. One recent estimate suggests its annual turnover amounts to BGN 500 million (app. EUR 260 million), and estimates of the number of those involved range from about 5 000 to 200 000 – 300 000, the vast majority of whom are impoverished low-level diggers.