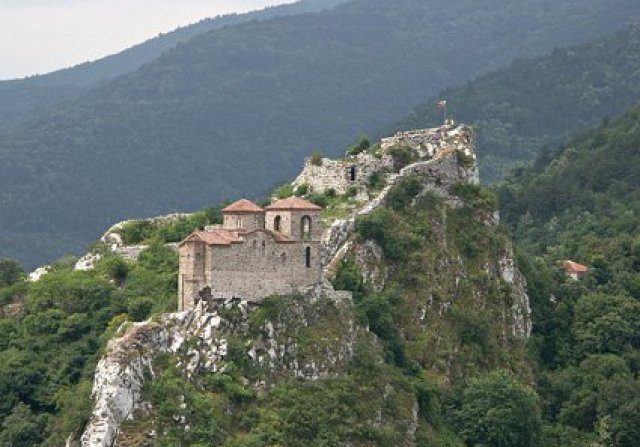 A view from a distance of Asen’s Fortress hill with the Churth of the Holy Mother of God. Photo by Asenovgrad Museum of History

The area around the medieval Asen’s Fortress near the town of Asenovgrad in Southern Bulgaria has been inhabited since around the 7th-6th millennium BC, local archaeologists have revealed during a presentation of their finds from the 2014 summer excavations.

Archaeologists Rositsa Moreva and Ivan Dukov, who is the Director of the Asenovgrad Museum of History, have given a public presentation about their discoveries from the 2014 excavations of two medieval fortresses – Asen’s Fortress and the Upper Voden Fortress – located close to one another near the town of Asenovgrad.

Last week, the Director of the Asenovgrad Museum of History, Ivan Dukov, revealed in advance that they had discovered a Neolithic bone needle and 100 meters of previously unexplored fortress wall at Asen’s Fortress, and had found ancient pithoi and medieval Byzantine seals at the Upper Voden Fortress.

During their official presentation, however, the Asenovgrad archaeologists have added more previously unknown information about their discoveries from last year.

They say their latest excavations and research have shown that the area around Asen’s Fortress shows traces of civilized human life as early as the 7th-6th millennium BC, which is about 1500 years earlier than archaeologists had thought until last year.

In the Upper Voden Fortress, the archaeologists explored a necropolis and discovered ancient pithoi, medieval ovens, a coin of Alexander the Great, and lead seals from the 11th century, among other items.

TheUpper Voden Fortress (located on a strategically important mount with an altitude of 516 meters, overlooking the Thracian plain) was first built in the 9th-10th century but on the foundations of a previously existing Early Byzantine fortress.

Asen’s Fortress is located on a high and isolated rock near the southern Bulgarian town of Asenovgrad dates back to the height of the Second Bulgarian Empire (1185-1396 AD) and the Asen Dynasty (1185-1256 AD), and is best known for the well preserved 12th-13th century Church of the Holy Mother of God.

Dukov has also revealed additional information about the newly uncovered 110-meter section of the southern fortress wall of Asen’s Fortress.

Last week, he explained the new excavations indicated that the fortress wall had been modified several times, with three main construction periods, and that it was first built with huge stone blocks, up to a meter in size, while the latest modification was made with smaller stones, with no cementing.

He says the excavations showed that the fortress wall was strengthened in later periods by adding masonry on both of its sides.

“At present, it is hard to date these construction layers. What impressed us was that there is a fortress wall about 1.5-2 meters wide on such steep terrain," Dukov explains, as cited by the Bulgarian information agency Focus.

“Even though we excavated 110 meters of the fortress wall, we didn’t find any towers or other similar medieval fortifications. Apparently, its function was to keep the enemy at a distance that was convenient for shooting or shelling from the tall rock located to the north," he notes.

View here: A photo gallery of Asen’s Fortress and its 12th-13th century Church of the Holy Mother of God (by ArchaeologyinBulgaria.com)

Asen’s Fortress (Asenova Krepost) is a medieval Bulgarian fortress near the southern Bulgarian town of Asenovgrad (which takes its name from the fortress). It dates back to the height of the Second Bulgarian Empire (1185-1396 AD) and the Asen Dynasty (1185-1256 AD). Asen’s Fortress is located on a 300-meter-high isolated rock, on the northern slope of the Rhodope Mountains. Its location features traces of Neolithic, Ancient Thracian, and Byzantine settlements. It was mentioned as Petrich (not to be confused with today’s town in Southwestern Bulgaria) in an 11th century statute of the nearby Bachkovo Monastery. Asen’s Fortress was conquered by crusaders from the Third Crusade. It was renovated in 1231 AD during the reign of Bulgarian Tsar Ivan Asen II (r. 1218-1241) as a stronghold against the Crusanders’ Latin Empire (1204-1261). It is best known for the well preserved 12th-13th century Church of the Holy Mother of God, a two-storey cross-domed single-naved church with a wide narthex and a large rectangular tower, with 14th century murals. Asen’s Fortress was captured by Byzantium after Tsar Ivan Asen II‘s death, and regained by Bulgaria in 1344 under Tsar Ivan Alexander (1331-1371). It was conquered by the Ottomans Turks during their invasion of Bulgaria at the end of the 14th century even though the church remained in use during the following centuries. According to some sources, the fortress was destroyed in the Ottoman Interregnum when Ottoman princes fought for the succession of the Ottoman throne (1402-1413 AD).

The Upper Voden Fortress, also known as Voden or Votina, located near today’s southern Bulgarian town of Asenovgrad is connected mostly with the role of Byzantine politician of Georgian origin Gregory Pakourianos (Gregorius Pacurianus), the founder of the nearby Monastery of the Mother of God Petritzonitissa in Bachkovo, which he established in 1083 AD. The Upper Voden Fortress was first excavated in the 1960s by Dimitar Tsonchev, and since 1976 – by renowned Bulgarian archaeologist Rositsa Moreva, who is also in charge of the current excavations. Evidence indicates that the Upper Voden Fortress (located on a strategically important mount with an altitude of 516 meters, overlooking the Thracian plain) was first built in the 9th-10th century but on the foundations of a previously existing Early Byzantine fortress. In modern-day Bulgaria, not unlike all other archaeological sites, it has been damaged by treasure hunters but also by locals wishing to mine stones from it for house construction.