Bulgarian Prime Minister Boyko Borisov (center) with Patriarch Neofit (left) during the celebratory liturgy for the 1150th anniversary of Bulgaria’s adoption of Christianity amidst the ruins of the 9th century Great Basilica in the early medieval Bulgarian capital of Pliska. Photo: Shum.bg

Bulgaria’s government will allocate BGN 500,000 (app. EUR 255,000) for renewing the excavations of Pliska, capital of the First Bulgarian Empire in 680-893 AD, Bulgarian Prime Minister Boyko Borisov has announced during the celebrations for the 1150th year since Bulgaria’s adoption formal adoption of Christianity as a state religion in 865 AD.Together with Bulgaria’s President Rosen Plevneliev and other officials, Borisov has participated in the celebrations and has attended the liturgy served by Bulgarian Patriarch Neofit amidst the ruins of the 9th century Great Basilica in Pliska to commemorate Bulgaria’s adoption of Christianity under Knyaz Boris I Mihail (r. 852-889; 893 AD).

In his words, the BGN 500,000 will be initial funding intended to kick start a wider project for the further exploration, reconstruction and restoration of the early medieval Bulgarian capital as part of efforts for promotion of cultural tourism, which is expected to help the economy of Pliska, today just a small town in rural Northeast Bulgaria.

Borisov has expressed regret that little attention has been paid over the years to the development of Pliska, and to the restoration and promotion of its archaeological and historical heritage.

“[Pliska] will get a subsidy [for the excavations]. [The restorations] will be beautiful, and they will be done so that [people] arriving here will be able to see the development through the centuries. As the basilicas and the other structures, which bring pride to [Bulgarian] history, are getting revealed, we will be allocating more funding,” promises the Bulgarian Prime Minister, as cited by local news site Shum.bg.

Borisov adds that the archaeologists presently conducting rescue excavations of a prehistoric settlement between the city of Shumen and the town of Belokopitovo along the future route of Hemus Highway, which is to connect Bulgaria’s capital Sofia and the city of Varna on the Black Sea, need 45 days to complete their digs. However, in case they are done earlier they can utilize the promised state funding by immediately starting excavations in Pliska.

“Pliska will become just as attractive as Perperikon,” he promises, referring to the prehistoric, Ancient Thracian, and medieval rock city and fortress of Perperikon (Perperik) near the southern city of Kardzhali in the Rhodope Mountain.

He also says that he has already been offered 2-3 projects for restorations of archaeological and historical monuments which are worth at least BGN 7-8 million (app. EUR 4 million).

One of the projects for an archaeological restoration in Pliska provides for rebuilding of the 9th century Great Basilica, which is said to have been the largest Christian church in Europe until the 17th century (even though it was not in operation by that time having been abandoned in the Middle Ages).

Pliska, which was the first capital of Bulgaria south of the Danube as the First Bulgarian Empire (632/680-1018 AD) covered most of Southeast and parts of Central Europe, was initially excavated at the end of the 19th century.

Even though a lot of state funding has been invested into the city’s archaeological exploration, Bulgarian archaeologists have managed to excavate only about 8% of its vast territory. 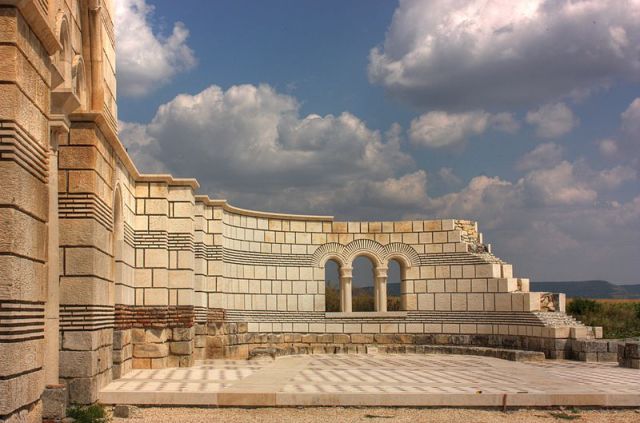 The 9th century Great Basilica in the former Bulgarian imperial capital of Pliska has been partially restored but now a NGO has set out to rebuild it fully. Photo by Klearchos Kapoutsis, Wikipedia

A model from the Pliska Museum of History showing what the Great Basilica in the then Bulgarian capital looked like in the 10th century AD. Photo by Svilen Enev, Wikipedia

As a result of the successful reigns of Khan (or Kanas) Krum (r. 803-814 AD), Khan (Kanas) Omurtag (r. 814-831 AD), Khan (Kanas) Malamir (r. 831-836), and Khan (Kanas) Presian (r. 836-852 AD), by the middle of the 9th century the First Bulgarian Empire had become a huge empire spanning from the Black Sea in the east to the Adriatic Sea in the west, and from the Northern Carpathian Mountains in the north to the Aegean Sea in the south, including the entire or part of the territory of modern-day Bulgaria, Romania, Serbia, Greece, Turkey, Albania, Macedonia, Hungary, Moldova, and Ukraine. However, the major peoples inhabiting the Bulgarian Empire – the Ancient Bulgars (whose religion is known as tengriism) and the Slavs as well as the local Thracian population and others – worshipped different gods according to their own religions and mythologies. This was true even though there were entire areas in the then Bulgarian Empire which had been Christianized in earlier periods, and even though the first Khans from the House of Dulo are believed to have been Christians who were baptized by the imperial court of the Eastern Roman Empire, i.e. Byzantium: Khan (Kanas) Kubrat (r. ca. 630-ca.660) who founded the so called Old Great Bulgaria in 632 AD on the territory of much of modern-day Ukraine and Southwest Russia; Khan (Kanas) Asparuh (r. ca. 680-700) who expanded the state to the southwest technically creating modern-day Danube Bulgaria around 680 AD; and Khan (Kanas) Tervel (r. 700-718/721) who saved Europe from an Arab invasion during the siege of Constantinople in 717 AD. This led Khan Boris I to decide to unite the different ethnicities in the First Bulgarian Empire with a new common religion, and to pick Christianity (even though the adoption of Islam and Judaism were also offered to him by foreign emissaries) because Bulgaria was then the only still pagan major European power, and he wanted Bulgaria to be treated as an equal by the Byzantine Empire in the east and the successors of the Frankish Empire in the west.

While Khan Boris I initially intended to adopt the Western form of Christianity from the Pope in Rome via the Kingdom of the East Franks (East Francia in modern-day Germany) because Byzantium had been Bulgaria’s major geopolitical foe, he was forced to change his decision after an unsuccessful war with the Byzantines imposed on him the adoption of the Eastern form of Christianity as part of a peace treaty signed in 863 AD. This resulted after the First Bulgarian Empire had had to fight simultaneously Byzantium in the southeast and Great Moravia in the northwest. Thus, in 863 or 864 AD, a mission from the Patriarch of Constantinople Photios came to Pliska and converted the Bulgarian Tsar, his family and high-ranking dignitaries, who were baptized as Christians. Khan Boris I became Knyaz Boris I Mihael – taking the name of his baptist, Byzantine Emperor Michael III (r. 842-867 AD), and in 865 AD there was baptism en masse of the entire Bulgarian population. Thus, even though the subsequent years saw the first major clashes between the Pope in Rome and the Ecumenical Patriarch in Constantinople over the “Bulgarian Question”, i.e. whose diocese the large and powerful newly baptized First Bulgarian Empire should belong to, Bulgaria remained in the camp of Eastern Orthodox Christianity subsequently helping pass it on to later emerging nations such as Serbia and Russia, and thus modifying forever the history of Europe.

Bulgaria’s adoption of Christianity, however, went far from smoothly, and not only because of the clashes between the Pope in Rome and the Ecumenical Patriarch in Constantinople over whose diocese the newly converted Bulgarians should belong to. In 865, conservative Bulgar aristocrats from all 10 komitats (administrative regions) of the First Bulgarian Empire revolted against Boris, who now took the Christianized title of Knyaz (i.e. King) in order to restore the old religion, tengriism. Knyaz Boris I managed to suppress the revolt executing 52 Bulgarian boyars (heads of noble families). According to some sources, he also had their entire extended families executed. Until the end of his life, Knyaz Boris was haunted by guilt about the harshness of his measures and the moral price of his decision in 865. In his later correspondence with Pope Nicholas I, the Knyaz asked whether his actions had crossed the borders of Christian humility, for which the Pope offered forgiveness: “You have sinned rather because of zeal and lack of knowledge, than because of other vice. You receive forgiveness and grace and the benevolence of Christ, since penance has followed on your behalf.”

Knyaz Boris realized that the Christianization of Bulgaria gave Byzantium great influence over the domestic affairs of the Bulgarian Empire. Thus, juggling the differences of Rome and Constantinople, he eventually managed to get Byzantium’s Ecumenical Patriarchate as well as the Pope in Rome to recognize an independent (autocephalous) Bulgarian Archbishopric, which was created in 870 AD in an unprecedented development for Europe because independent churches had been only those founded by Apostles or Apostles’ disciples. For example, the Papacy in Rome had been challenging Constantinople’s claim of equality to Rome on the grounds that the Church of Constantinople had not been founded by an Apostle of Jesus Christ. Nonetheless, this development was also a success for Byzantium, and during the decade after 870 AD, Pope Adrian II and his successors kept trying desperately to convince Bulgaria’s Knyaz Boris to leave Constantinople’s religious sphere.

Knyaz Boris I Mihail sealed the success of his deed, the adoption of Christianity, in 886 AD when Bulgaria welcomed the disciples of St. Cyril and St. Methodius, St. Kliment Ohridski and St. Naum Preslavski, helping them to teach thousands of Bulgarian clergymen to serve in Bulgarian. Thus, Bulgaria adopted the Bulgarian script, also known as the Slavic script – first the Glagolithic and then the Bulgarian (Cyrillic) alphabet. This allowed Knyaz Boris, and his successor Tsar Simeon I the Great to declare Bulgarian (also known as Old Bulgarian or Church Slavonic) as the official language of the Bulgarian Orthodox Church during the Council of Preslav in 893 AD (which also moved Bulgaria’s capital from Pliska to Veliki Preslav (Great Preslav)). As all over Europe religious services were held in the “official” church languages Latin and Greek, this “nationalization” of the liturgy language by Bulgaria became another exceptional development in medieval Europe after the recognition of the independent Bulgarian church.

← Bulgaria Celebrates 1,150 Years since Adoption of Christianity under St. Knyaz Boris I Mihail during First Bulgarian Empire
Bulgarian Archaeologists to Search for Roman Forum of Ancient Serdica in Sofia’s Downtown →

US Won’t Intervene in Donbass War in Ukraine, Will Stage Provocations on Crimea, Russian Expert Forecasts

Iran Ends Cooperation with EU on ‘Terrorism, Drugs, and Refugees’ over New Sanctions