The dawn of Varna‘s history dates back to the dawn of human civilization, the Eneolithic Varna Necropolis being especially well known with the discovery of the world’s oldest find of gold artifacts dating back to the 5th millenium BC.

Ancient Odessos (known as Odessus in Roman times) is considered the precursor of the Bulgarian Black Sea city of Varna. It was founded by Miletian Greek colonists at the end of 7th century BC, the earliest Greek archaeological material dating back to 600-575 BC. However, the Greek colony was established within an earlier Ancient Thracian settlement, and the name Odessos had existed before the arrival of the Miletian Greeks and might have been of Carian origin. Odessos as the Roman city of Odessus became part of the Roman Empire in 15 AD when it was incorporated in the Roman province Moesia. Roman Odessos is especially known today for its well preserved public baths, or thermae, the largest Roman single structure remains in Bulgaria, and the fourth largest Roman public baths known in Europe.

The First Bulgarian Empire (680-1018 AD) conquered Odessos (Varna) from Rome‘s successor, the Eastern Roman Empire, or Byzantium, in the late 7th century. It is even believed that the peace treaty in which the Byzantine Empire recognized the ceding of its northern territories along the Danube to Bulgaria was signed in Odessos. The wall (rampart) that the first ruler of Danube Bulgaria, Khan (or kanas) Asparuh built at the time as a defense against future Byzantine incursions is still standing. Numerous Ancient Bulgar settlements around Varna have been excavated, and the First Bulgarian Empire had its first two capitals Pliska (681-893 AD) and Veliki (Great) Preslav (893-970 AD) just 70-80 km to the west of Varna. It is suggested that the name of Varna itself is of Bulgar origin. In the Middle Ages, as a coastal city, Varna changed hands between Bulgaria and Byzantium several times. It was reconquered for the Second Bulgarian Empire (1185-1396 AD) by Tsar Kaloyan (r. 1197-1207 AD) in 1201 AD.

Check out these pages about related archaeological structures: 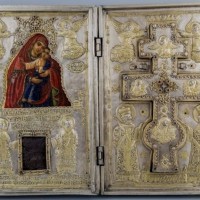