The Varna Museum of Archaeology based in Bulgaria’s largest Black Sea city is set to present an exhibition on the role of Ancient Roman civilization in the Black Sea region during the Antiquity period.

The exhibit entitled “Roman Art and Civilization – Antiquity’s Lingua Franca" is to be opened on March 10, 2015, at 4 pm, Elina Mircheva from the Varna Museum of Archaeology (also known as the Varna Regional Museum of History) has told Radio Focus – Varna.

The exhibition on the Roman civilization is organized as part of an international project entitled “The Black Sea – Unity and Diversity during Roman Antiquity" which brings together participants from seven nations from the Black Sea region with Ancient Roman heritage: Bulgaria, Georgia, Greece, Moldova, Romania, Turkey, and Ukraine.

The major objective of the project is to establish a network of scientific, cultural, and administrative institutions for long-term cooperation in cultural and archaeological exchange in the Black Sea region facilitating the preservation of the cultural heritage of Ancient Rome.

The exhibition of the Varna Museum of Archaeology will feature a total of 93 posters in which the participating countries will present their respective institutions involved in the project, the history of their region during the Roman age, and their Roman archaeological heritage.

The opening of the exhibit will include a scientific seminar, which is to take place in the museum’s Odessos Hall on March 10-11, 2015, will be entitled “Roman Art and Religion in Eúxeinos Póntos" (Eúxeinos Póntos, meaning “Hospitable Sea", was the Ancient Greek name of the Black Sea).

The scientific seminar will feature representatives of museums and universities from the seven participating countries as well as Prof. Claire Barat from the University of Valenciennes and Hainaut-Cambresis in France (Université de Valenciennes et du Hainaut-Cambrésis) and Dr. Adrian Popesku from Cambridge University.

The exhibition “Roman Art and Civilization – Antiquity’s Lingua Franca" will be on display at the Varna Museum of Archaeology until September 2015; together with the scientific seminar, it is the next to the last event under the international project.

The last event under the international project entitled “The Black Sea – Unity and Diversity during Roman Antiquity" will be an exhibition in the Romanian Black Sea city of Constanta. During this event the participants in the project are going to set up an association called “Center for Studying Roman Archaeological Heritage in the Black Sea". 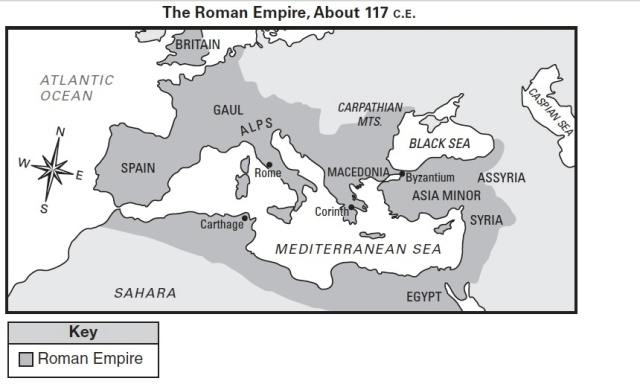 At its height, the Roman Empire stretched along the western, southern and eastern Black Sea coasts. Map from mrkash.com