The Zograf Digital Library at Sofia University now contains a digital copies of a total of 614 manuscripts in Old Bulgarian dating back from 10th until the 19th century. Photo: Sofia University

Sofia University “St. Kliment Ohridski" (“St. Clement of Ohrid") has announced the expansion of its specialized digital library of manuscripts in Old Bulgarian, also known as Slavonic or Church Slavonic, through the “digitization" and uploading of a total of 164 more manuscripts.

The newly digitized manuscripts include works dating back to the period between the 10th and the 19th century.

Old Bulgarian is the literary language developed in the First Bulgarian Empire (632/680-1018), after it adopted Christianity in 865 AD, and the Slavic script in 886 AD. It was first based on the Glagolithic alphabet developed by Byzantine scholars and diplomats St. Cyril and St. Methodius, and brought to Bulgaria by three of their five main disciples – St. Kliment Ohridski (Clement of Ohrid), St. Naul Preslavski (Naum of Preslav), and St. Angelarius.

However, the Bulgarian (Cyrillic) alphabet was developed by the disciples shortly after their arrival in Bulgaria (in the Ohrid Literary School and/or the Preslav Literary School) to supplant the Glagolithic, and emerged as the basis of the Old Bulgarian language.

The Old Bulgarian language gave the foundation and the start of the literary traditions of other Slavic Eastern Orthodox nations in Eastern Europe such as Serbia and Russia. However, in the Modern Era, and especially during the Soviet (communist) period, it has been often referred to as “Slavonic" or “Church Slavonic" language for political reasons (for example, to disparage the fact that the literary language of the Russian / Soviet Empire in fact originated in another, smaller country).

Sofia University’s Digital Research Library “Zograf" was first launched in June 2014 with a total of 286 Old Bulgarian (Slavonic) manuscripts. (In Bulgarian, the word “zograf" refers to an icon and mural painter; it stems from the Greek word “zographos" meaning “painter".)

It is a joint project of the Sofia University Library and the Department of “Cyril and Methodius Studies", which focuses on the study and research of Old Bulgarian language and literature and is part of the Slavic Studies Department.

With the new additions, the Zograf Digital Library of Sofia University already features a total of 614 digital copies of Old Bulgarian (Slavonic) manuscripts, whose originals are kept in the collections of numerous cultural institutions in Bulgaria and abroad.

The manuscripts which are thus available to researchers in a digital archive include works such as Codex Assemanius, the Manasses Chronicle (a 14th century translation in Old Bulgarian of a chronicle by 12th century Byzantine historian Constantine Manasses), the Reims Gospel, among many others.

Under No. 43, the digital library features the original of the “Istoriya Slavyanobolgarskaya" – “Slavonic-Bulgarian History", authored in 1762 by Bulgarian monk and scholar St. Paisiy Hilendarski (St. Paisius of Hilendar), the book that almost literally brought about the Bulgarian National Revival in the 18th-19th century when Bulgaria was still part of Ottoman Turkey, a period known as the Ottoman Yoke (1396-1878/1912).

Other digitized manuscripts include the vitae (i.e. hagiographies or biographies of saints) of St. Ivan Rilski (St. John of Rila) (translated into English here), St. Onufrius of Gabrovo, St. Kozma of Zograf as well as liturgy and prayer books.

Some of these Old Bulgarian manuscripts were discovered attached to printed books from a later period creating an intriguing symbiosis of print editions and manuscripts.

The formal presentation of the new additions to the Zograf Digital Library. Photos: Sofia University

Out of the 164 newly digitized Old Bulgarian manuscripts, 120 come from the collection of the St. George the Zograf Monastery (official website – in Bulgarian), the Bulgarian monastery on Mount Athos (the “Holy Mountain") in Greece, and another 44 come from the archives of the National Museum of History in Sofia.

The Zograf Digital Research Library of Sofia University was started in 2014 precisely with digitized copies of Old Bulgarian manuscripts from the St. George the Zograf Monastery, and has since been expanded with manuscripts from the collections of the Apostolic Library at the Vatican, the City Library of Reims (France), the Dragomirna Monastery in Romania, the Center for Slavic and Byzantine Studies “Prof. Ivan Duychev" at Sofia University, the Ivan Vazov National Library in Plovdiv, the Kyustendil Regional Museum of History, and the Theology Department of the Sofia University Library.

A total of 405 out of the 614 digitized manuscripts at the Zograf Digital Library come from the collection of the St. George the Zograf Monastery on Mount Ahtos.

Most of these are late manuscripts from the 17th, 18th, and 19th century, “shedding light on the literary tastes of the time, the changes taking place in the spiritual mentality, and the religious cannon, the links between the Monastery and other cultural centers," in the wording of Sofia University’s press service.

“With the new manuscripts, which we received this year from the Zograf Monastery and the National Museum of History, we now have a collection of more than 600 manuscripts which can be accessed in a digital format. I consider this a challenge for researchers from Bulgaria and abroad. It will provide for further research on the still unexplored pages of [Bulgaria’s] culture and literature over the centuries," Assoc. Prof. Anna Angelova, Director of the Sofia University Library, has stated during the presentation of the newly digitized manuscripts.

Prof. Margaret Dimitrova from the Department of Cyril and Methodius Studies at Sofia University has emphasized that the new collection includes also two early manuscripts, two sheets from a fragment of a typikon written in the Eastern Bulgarian tradition and a sheet of the floral triod from the 14th century in Middle Bulgarian writing. These manuscripts have been unknown to science and are yet to be studied.

“Our monastery has most probably preserved the bigger part of the spiritual history of the [Bulgarian] nation, and we’ve decided that it must be shared with the public and those wishing to research this history," Father Kozma from the St. George Zograf Monastery has stated.

In turn, Prof. Klimentina Ivanova, a prominent scholar of Old Bulgarian from the Slavic Studies Department of Sofia University, has praised the cooperation between the monastery and the university comparing the Zograf Ditigal Library to the work of St. Cyril and St. Methodius.

“The [Museum’s] collection is small in size but its content is truly unique… It has a great chronological scope – from the 13th century until the second half of the 19th century," Assoc. Prof. Vasya Velinova, Director of the Center for Slavic and Byzantine Studies “Prof. Ivan Duychev", is quoted as saying.

The oldest manuscript from the newly digitized collection of the National Museum of History is the Boyana Psalter, a 13th century code written on a parchment. It was discovered inside the walls of the world famous Pre-Renaissance Boyana Church in Sofia during the temple’s restoration, and was later restored by experts from the Museum.

Another very intriguing manuscript from the collection is a parchment panegyric containing works of St. Kliment Ohridski and St. John the Exarch. According to Velinova, it presents a “very archaic layer of works of Old Bulgarian writers" because, even though it is a 14th century copy from Serbia, it was certainly copied from an ancient Old Bulgarian manuscript. She believes it is to be researched for years to come.

“Sofia University can be proud of these so called “living manuscripts" from the Zograf Digital Library," Velinova has stated calling for their further research and preservation.

The Bulgarian Alphabet, the Cyrillic, as it is more known internationally), was developed at the end of the 9th century AD for the Old Bulgarian language, also known today as Church Slavonic, possibly at the Preslav Literary School and/or the Ohrid Literary School in the First Bulgarian Empire by St. Kliment Ohridski and St. Naum Preslavski. St. Kliment Ohridski (St. Clement of Ohrid) and St. Naum Preslavski are two of the five major disciples of St. Cyril and St. Methodius, the Byzantine diplomats and civil servants of Slavic (i.e. Bulgarian) origin who invented the first Slavic alphabet, the Glagolitic, in 855 AD or 862 AD). Among other reasons connected with the foreign policy goals of the Byzantine Empire, St. Cyril and St. Methodius invented the Glagolitic to help convert Slavs all over Eastern Europe to Christianity.

The Glagolitic alphabet was brought to the First Bulgarian Empire by St. Cyril and St. Methodius’s disciples (St. Kliment Orhidski, St. Naum Preslavski, St. Angelarius, St. Gorazd, and St. Sava) in 886 AD, after they were chased away from the Central European kingdom of Great Moravia by the Catholic Germanic clergy. In Bulgaria, the disciples, who were themselves Bulgarians, likely developed the new Bulgarian alphabet based on the Glagolitic script and allegedly called it Cyrillic in honor of their master, St. Cyril. Later Bulgarian clergymen, scholars, and missionaries spread this alphabet to other Slavic nations such as Russia and Serbia.

The Cyrillic (Bulgarian) alphabet is used today by about 300 million people in 12 countries in Eastern Europe and Northern and Central Asia; these are Slavic countries or non-Slavic countries that have been under Russian cultural influence, such as Mongolia which adopted the Cyrillic alphabet in the 1940s. With Bulgaria’s accession to the European Union in 2007, the Bulgarian alphabet (the Cyrillic) became the EU’s third official script, after the Latin and Greek alphabets.

Bulgaria and Bulgarians around the world celebrate the Day of the Bulgarian Alphabet (the Cyrillic) and Bulgarian Culture on May 24, the Day of St. Cyril and St. Methodius, a tradition which started during Bulgaria’s National Revival Period in the 19th century. 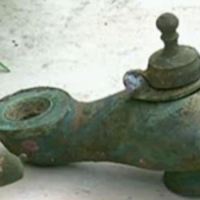