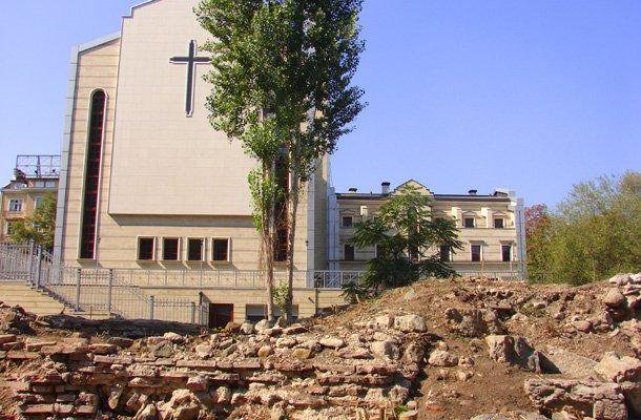 Photo of the excavations of the western gate of Ancient Serdica in downtown Sofia; the St. Joseph Catholic Cathedral is visible in the background. Photo: BGNES

The municipal authorities of the Bulgarian capital Sofia are going to restore the western gate of the Ancient Thracian and Roman city of Serdica located in the contemporary urban downtown, Todor Chobanov, Deputy Mayor in charge of culture, has announced.

The archaeological remains of the Ancient Thracian and Roman city of Serdica, which is known as the favorite place of Roman Emperor Constantine I the Great (r. 306-337 AD), dot the cityscape in the downtown of contemporary Sofia.

The municipal authorities, however, have been criticized for many years for failing to properly take advantage of the city’s ancient heritage by exhibiting it in situ, a goal that they have declared long ago as part of the long anticipated project for the rehabilitation of the so called Sofia Largo.

Now Deputy Mayor Chobanov has made it clear that the area around the western gate of Ancient Serdica, which is located near today’s Catholic cathedral St. Joseph, will be restored, and will be used for small-scale events such as concerts.

To achieve the intended result, the authorities will rebuild the ancient fortress wall, he explains, as cited by Offnews.

“The western gate of the ancient city of [Serdica] will turn into one of Sofia’s leading attractions," Chobanov predicts. 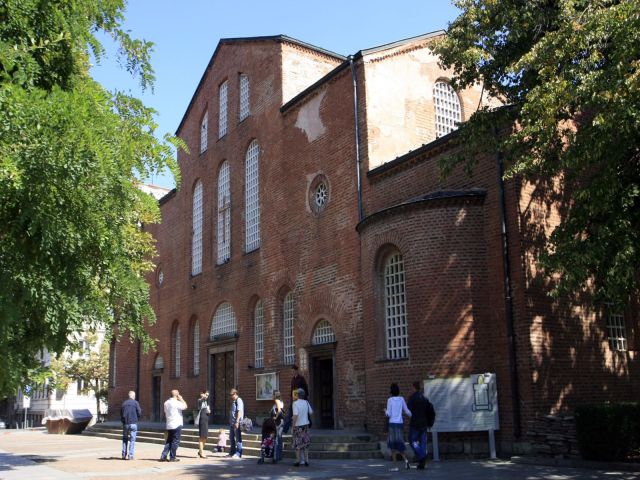 He has also announced a new project in another of Sofia’s top archaeology monuments – the restoration of about 20 square meters of original Early Christian mosaics in the underground museum in the necropolis of the 4th century St. Sofia Basilica, which is said to be the oldest functioning Christian temple in Europe, and whose name the Bulgarian capital Sofia took during the Middle Ages.

“This is one more step in restoring [the St. Sofia Basilica] as similar as possible to its original appearance. We expect to complete the restoration in the next 1-2 years, and to start installing exhibition elements that will make the museum even more attractive," Chobanov says with respect to the future of the St. Sofia Basilica necropolis which was turned into an underground museum in 2013.

The underground museum of the Ancient Roman necropolis underneath the St. Sofia Basilica in the downtown of the Bulgarian capital. Photo: Info Center Sofia

The Deputy Mayor of Sofia also points out that Sofia Municipality will support the Bulgarian Ministry of Culture in the realization of its project for the restoration of the so called Sofia Largo (the downtown Independence Square) which has been terminated several times in recent years, and has thus experienced a huge delay.

“We do hope that the main phase of the conservation and restoration [of the Sofia Largo] will begin soon, and Sofia Municipality has already signed a contract with the Bulgarian Academy of Sciences for the joint management of the site and for organizing a joint exhibition in the underground museum," Chobanov explains.

The underground museum of the Ancient Roman necropolis underneath the St. Sofia Basilica in the downtown of the Bulgarian capital. Photo: Info Center Sofia

He also says that as of 2016 Sofia Municipality will offer tourists a special tour of the Ancient Thracian and Roman city of Serdica that will start with the viewing of the archaeological sites of the Sofia Largo.

“This is the place with the greatest potential to be a top tourist destination when it comes to the Roman heritage theme," Chobanov adds.

The Ancient Thracian and Roman city of Serdica is the precursor of the contemporary Bulgarian capital Sofia. The oldest traces of civilized life in Sofia are from a Neolithic settlement dated back to 5000 BC located in today’s Slatina Quarter. There are also traces of life from the Charcolithic (also known as Aeneolithic or Copper Age) and the Bronze Age.

The name of the Serdi tribe gave the name to the Ancient Thracian settlement called Serdica or Sardica. The city of Serdica was conquered briefly in the 4th century BC by Philip II of Macedon and his son Alexander the Great.

Around 29 BC, Sofia was conquered by the Romans and renamed Ulpia Serdica. It became a municipium, the center of an administrative region, during the reign of Emperor Trajan (r. 98-117), and saw extensive development with many new buildings. It is known to have been the favorite place of Roman Emperor Constantine I the Great who used to say, “Serdica is my Rome".

In 343 AD, the Council of Serdica was held in the city, in the 4th century church that preceded the current 6th century St. Sofia Basilica. In 447 AD, the city was destroyed by the Huns. During the reign of Byzantine Emperor Justinian I (r. 527-565 AD), a new fortress wall was built whose remains have been excavated and can be seen today. This is when it was renamed Triaditsa.

It became part of the First Bulgarian Empire (632/680 – 1018 AD) in 809 AD when it was conquered by Bulgaria’s Khan Krum, and was known by its Slavic-Bulgarian name Sredets until the 14th century when it took the name of the St. Sofia Basilica.

The Western Gate of the Ancient Thracian and Roman city of Serdica (later the medieval Bulgarian city of Sredets), the predecessor of today’s Bulgarian capital Sofia.

The Western Gate of Ancient Serdica is said to have been especially important because of a building located across from it outside of the fortress wall of the Roman city which is believed to have housed its customs.

Today the ruins of the Western Gate and the Roman customs building are located in the downtown of the Bulgarian capital Sofia (as are all ruins of ancient Serdica), next to the St. Joseph Catholic Cathedral.

The Western Gate of Serdica was first discovered in 1974, and was excavated until 1980 resulting also in the unearthing of a pentagonal fortress tower, which was the northern tower of the gate, a section of the fortress wall, and a triangular tower were also unearthed.

In fact, the excavations of the Western Gate started back in 1974 because of the construction of a large building which today houses UniCredit Bulbank. Back then, the archaeological team led by Magdalina Stancheva from the Museum of Sofia History also exposed the ruins of the 11th century church St. Spas. During the 1990s, these ruins were exhibited in situ in the basement of the modern-day building.

The archaeological excavations were resumed in 2011-2013 by Sofia Municipality leading to the discovery of one of the main streets of the ancient city that led to the Western Gate. The part of Serdica adjacent to the gate was densely populated, and had water pipelines and sewerage that were repaired numerous times.

In 2012, the archaeologists unearthed seven-color floor mosaics with geometric motifs from the first half of the 4th century, i.e. the reign of Roman Emperor Constantine I the Great (r. 306-337 AD), inside a building which is believed to have been a large basilica with a colonnade and three parade entrances.

The Sofia Largo is the architectural complex of government buildings in downtown Sofia erected in the 1950s, in the early years of the former communist regime. Regardless of their Communist Era architecture, today the buildings house the most important Bulgarian government institutions and are one of the most famous parts of Sofia’s cityscape. Parts of the ancient city of Serdica, which have been excavated, can be seen in the underpasses and the Serdica Metro Station right next to the Sofia Largo.

The St. Sofia Basilica is located in the downtown of the Bulgarian capital Sofia, and is said to be the oldest functioning church in Europe. It is a cross basilica with three altars featuring Early Christian ornamental or flora and fauna-themed floor mosaics. It was first built in the 4th century AD on the site of several earlier places of worship, which was also the site of the necropolis of the Ancient Thracian and Roman city of Serdica, even though it was rebuilt in the 6th century into its current form.

This is believed to be the fifth structure built on the site. Its last reconstruction was during the reign of Byzantine Emperor Justinian I (r. 527-565 AD), which makes it a contemporary of the Hagia Sophia Chruch in Constantinople, today’s Istanbul. The St. Sofia Basilica is also famous for hosting the Early Christian Council of Serdica, probably held in 343 AD, and attended by 316 bishops.

During the Second Bulgarian Empire (1185-1396 AD), it gained the status of a metropolitan church, and in the 14th century it gave its name to the city which had been known by its Slavic-Bulgarian name of Sredets. In the 16th century, after Bulgaria’s conquest by the Ottoman Turks, the St. Sofia Basilica was turned into a mosque with the destruction of the 12th century murals and the addition of minarets.

However, two earthquakes destroyed one of the minarets in the 19th century, and the mosque was abandoned. It has been restored since 1900. In 2013, the ancient necropolis and tombs underneath the St. Sofia Basilica, some of which have murals, were turned into an underground museum open for visitors.