Excavated ruins at the palace of Khan Omurtag (r. 814-831) in the Ancient Bulgar Aul near Veliki Preslav. Photo: Izvora, Wikipedia

Bulgaria’s Ministry of Culture has upgraded the status of a 9th century AD Ancient Bulgar aul (a fortified settlement) whose ruins are located near the northeastern city of Shumen and Veliki Preslav, capital of the First Bulgarian Empire (632/680-1018) in 893-970 AD.

The settlement is formally known as Khan Omurtag’s Aul as it was a residence of Bulgarian Khan (or Kanas) Omurtag (r. 814-831 AD), ruler of the First Bulgarian Empire at the end of its pagan period (i.e. before it adopted Christianity in 865 AD).

The Aul of Khan Omurtag, near today’s town of Khan Krum (named after Khan Omurtag’s fathe) also has archaeological structures from the Late Antiquity and from the Christian period of the First Bulgarian Empire, i.e. the 10th century AD.

A decree of Bulgaria’s outgoing Minister of Culture Vezhdi Rashidov has recently been issued confirming the Aul’s status as a “monument of culture of national importance”, and ordering a stricter security regime for it.

The local authorities from Veliki Preslav Municipality had asked the Culture Ministry to provide the Ancient Bulgar aul with the status of a national archaeological preserve, and while that has not been granted, the upgrade has still been welcomed by the Municipality which announced it on its website.

Its initiative had been supported by the Institute for Cultural Heritage Properties, a body of the Ministry of Culture, by the National Institute and Museum of Archaeology in Sofia, the Ministry of Regional Development and Public Works, Shumen District Governor’s Administration, and by other institutions.

The ministerial decree confirms that the archaeological site of Khan Omurtag’s Aul has a territory of 256 decares (app. 64 acres) near the towns of Khan Krum and Troitsa, and bans its usage as a pasture, access of domestic animals, the lighting of fires, or construction works (except for building tourism infrastructure).

The decree also provides for entering the Ancient Bulgar residence into the Register of Bulgaria’s Cultural Heritage Properties.

In the 4th-5th century AD, the site of the later Ancient Bulgar aul was inhabited by Christianized Goths who received the status of foederati of the Roman Empire and settled in today’s Northern Bulgaria.

Archaeological excavations in the 2000s have indicated that it was possible that one of the churches unearthed on the site was a “personal” temple of a Gothic bishop, possibly Gothic bishop Ulfilas (Wulfila) (ca. 311-383 AD) who invented the Gothic alphabet and translated the Bible from Greek into Gothic.

A total of five churches have been discovered on the site of the Ancient Bulgar aul near today’s town of Khan Krum since it was first excavated in the 1950s.

Four of these are Early Christian temples from the Late Antiquity, including the Gothic bishop’s “personal” church which features remains of the earliest known Christian murals on Bulgaria’s territory, and another larger bishop’s basilica.

In 2009, the team of Kremena Stoeva discovered a fifth church on the site of the aul, which has turned out to have been a large medieval Bulgarian church dating to the 880s AD, after the First Bulgarian Empire had adopted Christianity.

The 9th century church in question was 24 meters long and 16 meters wide, and is said to resemble the structure of the huge Great Basilica in the then Bulgarian capital Pliska.

In 2015, it was reported that signs such as upsilons, swastikas, half-swastikas, and others have been found on bricks and tiles in the Ancient Bulgar Aul.

Learn more about the Ancient Bulgar aul in the town of Khan Krum and its Gothic and Thracian predecessor in the Background Infonotes below!

The Ancient Bulgar Аul near the town of Khan Krum, a fortified settlement, also known as the Residence or Palace of Khan Omurtag (r. 814-831 AD), ruler of the First Bulgarian Empire (632/680-1018 AD) is an Ancient Bulgar stronghold whose ruins are located in Veliki Preslav Municipality, Shumen District, in Northeast Bulgaria.

The aul is not far away from the first capitals for the First Bulgarian Empire south of the Danube – Pliska (680-893 AD) in the pagan period, and Veliki Preslav (Great Preslav) (893-970 AD), which is associated with the period after Bulgaria’s adoption of Christianity in 865 AD.

Thus, with its inner and outer “city’, the aul was modeled on the planning of the capital Pliska but with much smaller dimensions.

Inside the stone fortress, a number of Ancient Bulgar buildings have been discovered, including a bath with a changing room and firewood storage facility.

The Ancient Bulgar aul in today’s town of Khan Krum is thought to have been the Palace of Khan Omurtag mentioned in his Chatalar Inscription which means the castle was built in 822 AD. It was in existence until the end of the 10th century, and the beginning of the 11th century AD when the First Bulgarian Empire was conquered by Byzantium.

Before the arrival of the Ancient Bulgars, however, the place was inhabited in the Antiquity period. Earlier archaeological structures found there have been identified as the Arian Episcopal see of a Gothic bishop.

The Chatalar Inscription was found in the town of Khan Krum (then called Chatalar) in 1905. The inscription‘s text says that Khan Omurtag built an “aule” with four columns topped by two lion sculptures near the Ticha River.

Even though the aul was initially believed by scholars to have been Veliki Preslav, the city that succeeded Pliska as the capital of the First Bulgarian Empire, in the recent decades it has been proven that the aul in question was in fact Omurtag’s residence near the town of Khan Krum because the ruins there match the description.

It remains unclear whether the word aule from the Chatalar Inscription should be interpreted as the Greek word meaning “palace” or “court”, or the steppe aul, a fortified ruler’s center.

The evidence that the ruins near the town of Khan Krum were in fact the aul from the Chatalar Inscription includes discovered fragments of a lion sculpture that was 1 meter tall. It has been identified as one of the two lions mentioned in the inscription.

As far as the pre-Ancient Bulgar settlement on the site, an earlier archaeological layer dating back to the Late Antiquity, the 4th-5th century AD, indicates traces of Goth as well as Ancient Thracian presence. In 1976, archaeologists excavating the aul found a 4th century Early Christian church with remains of the earliest known Christian murals in Bulgaria.

A total of five churches have been unearthed on the spot of the aul, four of which date to the Early Christian and Late Antiquity period.

These include a 4th century bishop’s basilica (30 meters long and 26 meters wide), and another church from the same period – which is the above-mentioned church with the earliest Christian murals on the territory of modern-day Bulgaria.

At the time, the region was settled by Goths, and it is believed that the church with the murals was a “personal” church of a Gothic bishop, possibly of Ulfilas (Wulfila) himself.

In the 4th century AD Gothic bishop Ulfilas (Wulfila) (ca. 311-383 AD) received permission from Roman Emperor Constantius II (r. 324-361 AD) to settle with his flock of Christian converts as Roman foederati near Nicopolis ad Istrum in the province of Moesia, in 347-8 AD. There Ulfilas invented the Gothic alphabet and translated the Bible from Greek into Gothic.

Archaeological finds from what was an Antiquity settlement include Gothic and Ancient Thracian ceramics. Several graves containing ancient medical kits and golden Gothic decorations and fibulas have been found in the early 2000s.

In one of the graves, the archaeologists found a woman with an artificial skull deformation typical of nobles in peoples such as the Goths. It is believed that the settlement was conquered and destroyed during a Hun invasion in the 5th century AD.

In 2009, the team of Kremena Stoeva discovered a fifth church on the site of the aul which is a large medieval Bulgarian church dated to the 880s AD, after the First Bulgarian Empire adopted Christianity.

The 9th century church in question was 24 meters long and 16 meters wide, and is said to resemble the structure of the huge Great Basilica in the then Bulgarian capital Pliska.

The Residence of Khan Omurtag in the town of Khan Krum (named after Khan Omurtag’s father, Khan Krum, r. 803-814 AD) was first excavated in 1957 by archaeologists Vera Antonova and Tsvetana Dremsizova – Nelchinova from the Shumen Regional Museum of History.

The archaeological excavations continued until the early 1980s, and were resumed in 2002 by archaeologist Todor Balabanov from the Shumen Branch Office of the National Institute and Museum of Archaeology of the Bulgarian Academy of Sciences.

After 2008, the excavations at the aul near the town of Khan Krum have been led by Kremena Stoeva from the Veliki Preslav Museum of Archaeology. 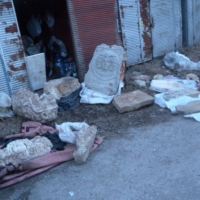 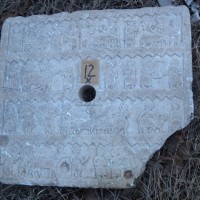 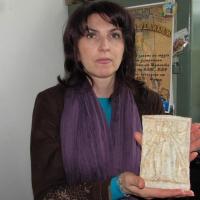